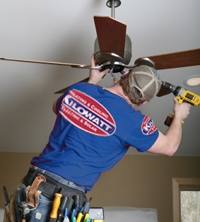 Ceiling fans are an excellent way to stay cool in the summer without placing too much extra stress on an air conditioning system. Properly installed ceiling fans create a breeze through a living space, and this movement of air creates a “wind-chill” effect… except you want to feel a bit of chill in hot weather! The air removes the heat envelope from around the human body, making it easier for the body to release heat and cool down.

But you can still get use from your fans during the cooler parts of the year, aside from seeing them as simply decorations. During a mild Southern California winter, reversing the direction of ceiling fans will help warm up your house.

The basic setting on ceiling fans is for the fan blades to spin counterclockwise (viewed from beneath). This motion creates the breeze through the living spaces. But most modern ceiling fans have a switch located on their base that switches the direction of the spin of the blades. When the blades move clockwise, they create an updraft. This pushes down the air at the top of a room. Since heat rises, this motion forces down the heat gathered at the ceiling. The result is a much faster distribution of heat throughout a space. This is particularly helpful if you have a forced-air heater, like a furnace, that blows air out of vents. This air collects first at the ceiling, and a fan will help pull it down so you can enjoy its warmth faster.

To make the most of the energy-saving possibilities of a ceiling fan, it’s a good idea to adjust the thermostat down accordingly. With the fan working, you can often decrease the temperature by 2° to 4°F.

If you don’t have ceiling fans, please give Kilowatt Heating, Air Conditioning and Electrical a call today! We offer ceiling fan installation and other services in Tarzana, CA.