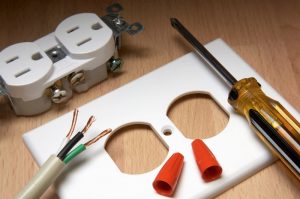 Dead outlets. They happen, and they’re annoying. Of course, you don’t just want to curse your bad luck, yell at the failed outlet a bit, and then pull out extension cords so you can use a different plug. You want that outlet fixed. And in many cases, it’s best to have that outlet updated if it’s an older one. We don’t just mean upgrading from old two-prong outlets to three-prong grounded outlets—we hope your home already has three-pronged outlets throughout it. We mean making the upgrade to GFCI outlets.

What to do with a broken outlet

Sometimes an apparently dead outlet is due to a simple error. Is the outlet controlled by a light switch? It’s a good idea to check to make sure, especially if the dead outlet is in a room you don’t often use. Look to see if the power isn’t out in the whole house. See if there are other outlets that are dead, and if there are, we recommend checking on the circuit breaker box to make sure a circuit hasn’t been tripped. And, if the outlet is a GFCI one (we’ll get to this more below), hit the “reset” button and try the outlet again.

If none of these simple problems are behind the dead outlet, we strongly warn you against pulling out the toolbox and taking a screwdriver to the outlet cover to see if you can fix the problem yourself. There’s a risk of electrical shock, as well as creating an electrical fire hazard if you tamper with something. Instead, we advise you call us for electric repair in Burbank, CA or in other parts of the Los Angeles and San Fernando Valley. Licensed professional electricians will see repairs are done safely. And if the electricians recommend replacing the outlet, they’ll see you have the right new one in place.

What’s a GFCI outlet? You’ve probably seen them before, either in your own house or in other buildings. These are the outlets that have a pair of buttons between the sets of prongs, marked “reset” and “test.” GFCI stands for ground-fault circuit interrupter, and these outlets are important safety devices. Circuit breakers are designed to protect an electrical system from voltage overload. But a GFCI outlet is designed to protect you (and anyone else in your house) from high voltage shocks coming from the outlet or appliances plugged into it.

The GFCI outlet monitors the flow of electricity from the “hot” side of the outlet to the “neutral” side. If there’s a change in the balance between these two, it means electricity from the hot side is being routed to the ground—and that means it’s going through something it should, i.e. a person. Immediately, the GFCI triggers an internal circuit breaker that shuts off the outlet and stops the electrical flow before somebody can get hurt. All it takes to restore the outlet is to press the “reset” button.

If you don’t have any GFCI outlets in your home, we strongly recommend having us install them for each of the bedrooms, as well as any room where water is used (i.e. the kitchen and bathrooms). It’s a simple operation, and you’ll feel much safer afterwards.