Up to $6500 in rebates! See here for full details: Read More

Why Would You Need to Replace a Capacitor in an Air Conditioner? 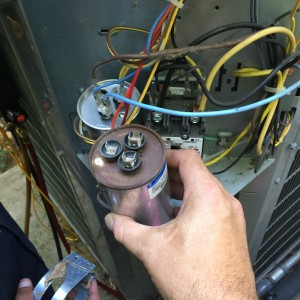 Around 85% of the repairs that air conditioners may need during the summer season are for their electrical systems… and the parts that need to be replaced most frequently are the capacitors. We’ll take a closer look at air conditioner capacitors and why you may need to have one replaced.

What Is a Capacitor?

A capacitor is an electronic device that temporarily holds an electrical charge. It’s something like a temporary battery. The standard capacitor in an AC is cylindrical and is attached to the motors that operate the fans and the compressor. They sent short bursts of voltage to start up these motors or to keep them running. (These are two separate types of capacitors, called start and run capacitors.)

Like any electrical component, a capacitor can fail due to stress, overwork, or basic age. A capacitor will begin to lose its ability to hold a charge, similar to the way that cellphone batteries will also start to lose their capacity over time. Intense heat can also damage a capacitor and limit its effectiveness—and that’s something to worry about in our climate, which often remains in the 90s for long stretches of the summer.

As a capacitor begins to fail, it will create a noticeable clicking sound. When you hear this, you should call on professionals to look into the problem. The capacitor will probably need to be replaced. If you let the capacitor fail, you’ll encounter an air conditioner that “hard starts,” meaning its motors will strain to keep running and the AC will soon shut down. This not only means poor cooling, it can also damage other components in the system—particularly the compressor.

Please don’t try to replace a capacitor on your own! You don’t want to risk creating an electrical problem by putting in the wrong capacitor type or connecting it incorrectly. Call our technicians when you suspect there’s a capacitor issue, and we’ll take care of everything.

Kilowatt Heating, Air Conditioning and Electrical offers the air conditioning repair you may need this summer in Studio City, CA.