Labor Day as a federal holiday, held on the first Monday of September, has been with us now for 120 years. President Grover Cleveland signed the law that made Labor Day a national holiday in 1894. Ever since then, the three-day weekend has provided people in the U.S. with the opportunity for vacations, time with their families, shopping trips, and a general celebration of the conclusion of summer and the beginning of fall.

However, there were twelve years of Labor Day observations in the U.S. before it became an official holiday. The first Labor Day celebration took place in 1882 in New York City on September 5. According to the accounts from the time, it had a rough start and almost didn’t happen.

The main event planned for that first Labor Day was a parade along Broadway that was to start at City Hall. However, the parade ran into a bit of a snag early on. The marchers started to line up for the procession around 9 a.m., with a police escort to make sure the event went peacefully. However, the problem of the day wasn’t rowdy members of the parade—it was that nobody had remembered to bring a band!

With people ready to march, but no music to march to, it started to look like no parade would happen at all, and the first Labor Day would have ended up a failure. But just in time, Matthew Maguire of the Central Labor Union—one of the two men who first proposed the celebration—ran across the City Hall lawn to the Grand Marshal of the parade, William McCabe, to inform him that 200 men from the Jeweler’s Union of Newark were crossing the ferry to Manhattan… and they had a band!

At 10 a.m., only an hour late, the band from Newark walked down Broadway playing a number from a popular Gilbert and Sullivan opera. They passed McCabe and the other 700 marchers, who then fell in line behind them. Soon, the spectators joined in, and an estimated 10,000 to 20,000 people marched through Lower Manhattan.

According to the New York Times, “The windows and roofs and even the lamp posts and awning frames were occupied by persons anxious to get a good view of the first parade in New York of workingmen of all trades united in one organization.”

The parade concluded two hours later when the marchers reached Reservoir Park. But the party was only getting started. Until 9 p.m., some 25,000 people celebrated with picnics and speeches and beer kegs. It was an enormous success, and all thanks to the speedy arrival of jewelers carrying band instruments.

If those musicians from Newark hadn’t shown up, perhaps we wouldn’t have the holiday opportunity that we now have every year. However you celebrate your Labor Day, our family at Kilowatt wishes your family a happy end of summer.

How Does Solar Air Conditioning Work?

When people think about the power of the Sun, heat is usually the first thing that comes to mind. So when you hear the term “solar air conditioning,” does it at first sound a bit… funny?

We understand, but solar air conditioning is a remarkably simple concept in operating, just like many solar power systems. Essentially, you use solar collectors on the roof to create electrical energy, and then use that energy to run the electric components of the AC. Presto! Air conditioning using the free power of the Sun.

Of course, there’s a bit more to explain than that. If you are curious about installing solar air conditioning in Studio City, CA, call the solar professionals at Kilowatt. We would love to help you put the hot California Sun on your side when it comes to cooling down your home.

The Basics of Solar Air Conditioning

There are a number of different types of solar ACs, but the most common in homes is the hybrid, which combines an array of photovoltaic (PV) cells installed on the roof and a standard air conditioner indoors.

As radiant energy from the sun strikes the PV cells on the roof (and you can expect ample amounts of sunlight in Southern California!), it creates a photovoltaic effect along the semi-conductors, which results in useable direct current (DC) electricity. The electricity doesn’t go straight to the air conditioner however: in a hybrid system, the power moves to a battery and charges it. Whenever the air conditioner requires power to run its compressor, fans, and other components, it draws power from this battery. This way, the air conditioner can continue to run at night when there is no sunlight to create current in the cells. With the number of sunny days that Southern California experiences every year, you should never experience any efficiency problems from a solar AC, and the savings you will rack up can be immense.

Solar air conditioners cost more than standard central ACs to install, but the PV cells on the roof should last you for many years with minimum maintenance needs, and the energy savings from using the Sun’s energy will help the system pay off its installation costs after only a few years.

Can You Afford To Be Green?

If you are like most Los Angeles homeowners your electric bills are high and your home comfort system accounts for the largest portion of your electricity usage.

Fortunately new technology is helping people to save up to 56% of the money they spend on heating and cooling. That’s big savings. Especially considering that DWP confirmed there will be rate hikes of 5-7% every year for the next 20 years.

The Federal Government and California really want you to be green. Right now $1,250.00 in Tax Credits and Utility Rebates are being offered to Los Angeles homeowners who install energy-efficient heating and AC equipment. There are also manufacturer’s incentives that crop up periodically which can represent substantial savings. Don’t worry! We stay current and always make sure you benefit.

When you put the energy savings together with the rebates, tax credits and the manufacturers incentives; it is safe to say that high-efficiency heating and air conditioning systems pay for themselves.

Yay! You CAN afford to be Green.

How Does Solar Air Conditioning Work?

Here in Sherman Oaks, we love spending time in the sun whenever possible. But what if you could continue to put the sun’s rays to good use even when you’re indoors? Solar air conditioning is a great way to stay cool and comfortable, while significantly reducing your cooling costs throughout the season and helping out the environment. We’ve put together this quick guide so you can learn more about these durable, efficient systems.

The environmental impact of solar energy is an important consideration for many homeowners who choose these systems. Air conditioners account for over 5% of the total energy consumption in the U.S. When carbon dioxide is released into the air, it reduces the air quality and is harmful to the environment. Solar air conditioning systems reduce carbon emissions significantly, converting sunlight to energy and using little to no electricity in the process.

In general, there are two types of solar air conditioning systems: those that use photovoltaic (PV) power, known as hybrid systems, and solar-powered absorption chillers, more often referred to as evaporative coolers or swamp coolers. When someone talks about solar energy, you may be most likely to picture rooftop panels used in hybrid systems and known as photovoltaic (PV) panels. These panels absorb the sun’s energy and convert it into electricity which operates the system and charges a backup battery for when there is not enough solar exposure.

A solar-powered absorption chiller uses the sun’s energy to heat water, beginning a thermodynamic process. The hot water is then chilled and is sent through a set of pipes installed throughout your system, so cool air can make its way through the ducts.

Some homeowners may worry about the cost of solar air conditioning installation. However, the energy savings over time may easily make up for any initial cost. These systems tend to last longer than conventional AC systems and usually need fewer repairs.

You can use the power of the sun to keep warm outside and cool off indoors with a solar air conditioner from Kilowatt. We offer quality installation services as well as maintenance and repairs for all AC systems. For more information about air conditioning in Sherman Oaks, call us today!

What are the Benefits of Installing a New AC System?

Air conditioners are designed to cool large spaces over a long time period, but, unfortunately, they cannot last forever. If you have owned your air conditioner for a long time, it may be difficult to part ways. But new air conditioning installation actually offers you many advantages. So how do you decide whether you should hang on to your older system or take the plunge and purchase a new air conditioner?

When to Retire Your Older System

Choosing to give up your older system can be tough. The cost of installation is high, but, on the other hand, a breakdown in the middle of summer can cost you far more and can leave you without air conditioning when you need it most. You should consider new air conditioning installation when your unit reaches its expected lifespan according to the manufacturer. Generally, a system that is ten years old is at risk of breaking down, although this varies according to how the system is used and maintained over the years. If you’ve had to call for air conditioning repair several times in the last couple of years, it may mean there is too much wear and tear on your system. In this case, replacement is more cost effective than repairing components piece by piece. 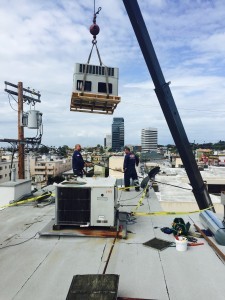 The Benefits of New AC Installation

Choosing to install a new air conditioner is not a decision to make lightly. You need a professional who can help you find the right system, size, and efficiency for your home and budget. For air conditioning installation in Sherman Oaks, call Kilowatt today!